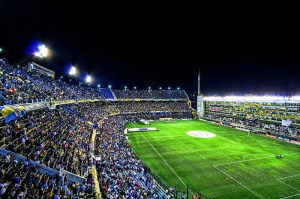 Having lived through painful days that culminated last night with the decision to eliminate Boca Juniors from the Libertadores Cup and a four-game ban, it makes sense to think about a future that is going to be very difficult.

First of all it is necessary to underscore the absolute solidarity with Club Atlético River Plate, its professional squad, its fans and all of those who may have felt affected by the violence last Thursday night. An apology is in order as is a firm commitment that nothing like this will ever occur again.

I am very much against generic punishments, based on the responsibility that “the clubs” have. In the first place because it is enough to put the criminals caught red-handed in jail, to carry out intelligence to find their accomplices and those who protect them. But that would require a political decision that is nowhere to be seen and that will not appear out of thin air once a harsh but useless punishment befalls the institution.

Secondly, because Boca (or River, or Nueva Chicago) are all of us, the tens of thousands of club members and millions of fans, who are most affected by the actions taken by others. At a time of so much fair and also merciless criticism, it must noted that the overwhelming majority of us have nothing to do with violence, nor with hooligans (barras) nor with the club officials, that just like in all of the other clubs, protect them. Nor with the politicians, unionists and judges that will some day have to answer for their actions. We will atone for their sins. That’s the way it was decided.

Thirdly, enormous economic damage is inflicted on the club given the huge loss of future revenue that it will suffer, thus limiting its ability to work for the neighbourhood and community — which become collateral victims of those calling for a heavy hand.

And lastly I think that this kind of sanction plays into the hands of the hooligans. Their good behaviour, from now on, at Boca and in any club will prove to be extremely costly because it has been shown that they have an immense capacity to wreak havoc. Without the eradication of the hooligans, the measures will be cosmetic so that nothing changes. Pure hypocrisy to calm things down today, perhaps tomorrow, may not be enough — not for those affected or the truly scandalized — but rather for those who feign and exaggerate their horror with cold calculation.

Back in 2000, Mauricio Macri in one of his comings and goings with the hooligans took a stand and decided to not give them tickets. For a game against Newell’s Old Boys, violent characters travelled to Rosario and launched a flare from outside the stadium toward the pitch. Boca was punished with a loss of points, it lost that championship and many celebrated but it set a terrible precedent — without the state’s decision to take action against the hooligans, the clubs would be obliged to buy the peace. That’s what happened.

The current club president, Daniel Angelici, managed that legacy worse than his predecessors. Today we have not one but two and possibly three different gangs of barras which engage in shootouts for business opportunities that one must presume are granted to them by the authorities. Just one group with aspirations that feels disgruntled is a recipe for disaster.

We have to remove national politics from Boca. That is, a struggle between competing interests is causing a great deal of harm to us fans. Our political preferences will be settled democratically with a vote at the right time and place. Not at everyone’s Boca.

That does not mean that those with political affiliations cannot or should not be part of the next phase, but what nobody should do is to seek to take control of Boca Juniors as a platform for power or worse, as a source of political financing.

What comes next should be plural, broad, generous, and have clear ideas. If there is support from the state and not just rhetoric, the plan to evict the barras should be considered. If not, history can repeat itself.

Us fans need to understand that in the struggle against violence in soccer what must end is tolerance of those who use violence, their acts and their reprehensible songs. The lyrics “matar una gallina y Racing el tercero” (a reference to kill River fans and the two Racing fans murdered in previous clashes with Boca fans) must never be heard again in La Bombonera.

Boca must be the pioneer in the struggle against violence in soccer, against discrimination, it must fight as an institution for the most noble of social causes. We must all commit to that.

The first step in that path is to respect the rules of shared living. CONMEBOL, just like the Argentine Soccer Association (AFA), are light years from being examples of transparency but Boca participates in their tournaments, follows them and submits itself to its procedures. If an excess should come our way, as good faith fans we must bottle our anger and accept it.

In sporting terms hard times lay ahead. We will watch how others play this Libertadores Cup — that has already happened in the past, when we had poor results and we didn’t even qualify.

Meanwhile we will have to carry out a painful reduction of our squad, giving it a new look, and take advantage of that necessity to get rid of negative leaders that we now have.

Then, always watch the finances, the last safeguard of sporting and institutional health.

And lastly, deprived of the international competition that we are so fond of, focus all of our energy and power on the domestic tournaments. If it’s possible, to become a hegemonic team and win everything that we challenge for with a healthy dose of competitive anger. So that our rivals worriedly ask when will Boca return to the international fold, so that it distracts their efforts.

We have to call upon the club’s icons, those who are able to lend a hand without seeking the limelight and able to participate in a collective effort. Those who are able and have the vocation. We have plenty of those, as our unrivalled history shows.

What comes next will be hard, sad, and in my opinion, unfair to a great extent. But we must not let our spirits fall. They aren’t about to decree our relegation nor our disappearance. Boca is huge.